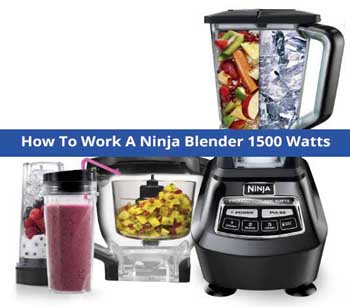 Smoothies no doubt are the easiest way to add your body with the various nutrients from healthy Fruit and Vegetables. Instead of eating the plates and plates of salad, you can sip your liquid refreshment from the glass and still get the same health benefit. In this post, I’m going to review and show you how to work a ninja blender 1500 watts for a silky and tasty beverage.

Even so, Ninja Shark has multiple blenders that operate with a 1500 watt motor, including the original and the second generation model. In this case, though, I’m referring to the former, Ninja mega kitchen system, which happens to be the oldest.

While it’s become a favorite of many and a true pioneer in household appliances, Ninja Kitchen is not that old in the industry. It’s part of the SharkNinja, introduced in early 2009 to provide house-care gadgets and appliances that are accessible to everyone.

By 2011, Ninja had several stunning achievements to envy, including the exclusive 6-blade [stacked] technology for crushing ice and 1200-watt blender line. But in the year that followed, the global manufacturer decided to bring its consumer more blending power and launched the model 1500-watt blender.

Also known as the Ninja Mega Kitchen System, it had a 2 horsepower motor, which is about .5 horsepower more than the preceding 1200-watt models. So, the owners of the new line could now process large batches using a larger jar size. Furthermore, the blender has a larger food processor bowl, plus it can work with Nutri Ninja Cups for single-serve blending.

Just as the nickname, therefore, the Ninja 1500W blender was and is a mega system and for a mega versatile chef. Apart from the model BL770, though, it’s available in several other variations, including BL771, BL772, and BL773CO.

Technically, the four blender models have similar performance and blend results. The only difference is with the included accessories, whereby some have extra additions unavailable with its peer.

Ninja 1500 Watts Blender: What’s So Special About It?

The following are some of the top things that stand out the Ninja blender 1500 watts from other makes and brands.
Versatility:

The system can easily switch between countertop blender, personal blender, and food processor. Thus, allowing you to make almost anything and prepare for any meal.

The blender comes with an XL 72-ounce jar that you can blend large batches fast and efficiently. It also has a large 64-ounce food processing bowl that you can make up to 7 or 8 cups of dips.

All the models in this blender line pack a 2HP 1500-watt motor that turns solid ice into a fine snow-like texture within seconds. It has three dedicated speed settings, plus a pulse feature that enables blending with optimal control.

The blender features the exclusive stacked blade assembly that pulverizes whole fruits and vegetables in a flash. Still, the blade crushes through the ice and frozen fruits without disappointing.

As mentioned, this blender is compatible with the Nutri Ninja technology, which allows you to hook the compact cups to the power base. Hence, enabling you to make single-serving and nutrient-rich beverages in less time. If on a busy schedule, you can even take your fresh smoothies to-go as the cups come with sealing lids.

Quick Guide: How to Work a Ninja Blender 1500 Watts

The following is a step to step guide on how you can bending with Ninja Mega Kitchen Blender.

A. When using Ninja 1500 Watts as a countertop [with 72-ounce pitcher]

The variable speed buttons, including the pulse function, are not usable when using the Nutri Ninja cup. You’ll have to rely on the designated single-serving button and you have to blend in short intervals for efficiency. Also, the manufacturer doesn’t recommend blending in the cups for long periods due to the risk of pressure build-up.

Is Ninja Blender 1500 Watts Worth Buying?

True, you certainly might feel a bit confused about which specific model of Ninja Mega Kitchen blender to pick for your home. However, all the variations give out the same amount of power, meaning the blend results are similar. The only difference between them is the accessories included in the box.

Also, by the way, the pricing of the Ninja blender 1500 watts variants will vary depending on the included components. You will notice a model like the Ninja BL773CO is a little expensive than the rest since it has all the intended components.

In any case, all the versions in the blender line can work as a countertop, food processor, or personal blender. So, the machine not only enables you to test its full motor potential but also make your kitchen life interesting and productive.