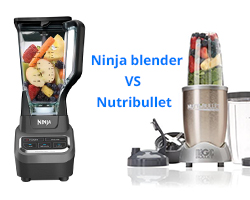 Bullet blenders are certainly the best when you have a tight kitchen or if you want a faster way to prepare your morning smoothies. However, more and more brands continue popping in the market while the battle between Ninja blender vs nutribullet goes on escalating.

The two, Ninja and Nutribullet, are the pioneers of the compact personal blender category, but it’s clear each wants the lead. Of course, we have everything to appreciate for that because every upgrade brings new features and capabilities.

On the negative side, though, it’s not easy for some to make a solid decision on whether to choose Ninja or Nutribullet. Both certainly have a good reputation, lovable products, and fair pricing. So, it’s very possible to make the wrong choice if you’re not sure of what you really are after.

In any case, today we’ll be working on the two brands side by side, comparing their strengths and weaknesses. We hope to help you find a perfect solution to your current situation. So, we’ll also include the safety issues on either that has them.

A Comparison Chart on the Various Features and Capabilities

Both Ninja and Nutribullet have a wide range of products to choose from. Here’s is a summary showing the various features of the Nutri Ninja Pro and Nutribullet Pro, which both share in motor size.

Ninja Blender vs Nutribullet: An Overview on the Manufacturers

Nutribullet is a label of blenders under Homeland Housewares, LLC. The manufacturer rose to fame with the original Magic Bullet blender, which was one of the top TV success stories in the 2000s.
After the glory of the Magic Bullet started drowning in the deep, the maker introduced a line of Nutribullet. And just like its predecessor, the new name became a favorite of many around the world.

The Nutribullet 600-Series was the first of the many, and with its re-engineered motor to improve blending and pureeing. While it did better than the Magic Bullet, some still felt the 600-Series was struggling in some tasks.

The manufacturer introduced a second generation of the original, which would have a stronger motor, larger capacity, and a 2-in-1 Pro Extractor blade.

As of now, Nutribullet has about 11 different blender series, with the latest being a redesigned Magic Bullet.

Ninja is also a spectacular line of blenders, with the inspiration to provide “innovative, 5-star appliances” that simply your kitchen life. The brand is part of the SharkNinja Operating LLC, a leading provider in household appliances and cleaning solutions.

Ninja blenders are the closest competitors of the Nutribullet series. The firm has various selections of the compact personal blenders, with the Ninja QB3001SS leading the category with its 700-watt motor.

Ninja kitchen has over a dozen different blenders, including the countertops and bullet models. The maker has a good taste of innovation, which is why they have invested in smart technologies like FreshVac to remove oxygen before blending. Hence, helping preserve the taste, texture, and vitamins in your blended refreshment drink.

Ninja Blender vs Nutribullet: Comparing the Various Similarities and Differences

Both Ninja and nutribullet have a wide variety of products to choose from. Most of the blenders from the two sides differ in design and performance. However, the Nutri Ninja Pro and Nutribullet Pro share several aspects other than the “professional” name.

First, the blenders have a decent and well-made plastic base housing to protect the motor from damage and extend overall durability. Then, they use a food-grade plastic cup that enables blending without contaminating the contained mixture with toxic chemicals like BPA.

The cup from the two machines is pretty clear to make it possible to see when the ingredients reach a perfect texture.
Still, the Nutri Ninja Pro has a compact design like that of the Nutribullet model. True, the latter is slender, but the two models can fit under the standard kitchen cabinets without challenges. Furthermore, the compact size is easier to carry with you when going for an RV road vacation.

Similar to the simple design, Nutri Ninja pro and Nutribullet Pro are effortless to operate. They employ the same blending technique, whereby you lock the cup to the power base while in an inverted position.

Since there are no buttons, the cup usually acts as the control switch for starting and stopping the motor. To do this, you only need to add the blender cup with the ingredients, secure the blade assembly, and place it onto the motor.

The machines allow blending in short pulses, in which case you press down the top of the cup to activate the motor. It works more like the pulse setting on the traditional kitchen blender because once you let go of the cup, the motor stops. Thus, you’ll have better control over the blending process since you can stop the blades from spinning once all the ingredients are pulverized.

While using the nutribullet, it’s possible to lock the cup to the base unit and let it run by itself. The Ninja blender, sadly, doesn’t support the hands-free feature.

As mentioned, Nutri ninja Pro and Nutribullet Pro share in terms of motor size. Their base system houses a 900-watt motor, which is equivalent to 1.2 horsepower. Of course, this is not the highest from either of the providers, but it’s pretty powerful to deal with both soft and tougher materials.

Just as we’ve mentioned, the blenders don’t have a control panel or buttons to press. So, the container is for processing, as well as starting and stopping the extractor blade. The blenders have a single speed setting, thus, you’ll need to be very careful not to over-process your ingredients.

The ninja pro and nutribullet pro blenders are quick and straightforward to clean. You’ll only need to separate all components from each other, then carry on with the practice.

Both manufacturers claim on the user manual that the components are dishwasher safe [excluding the motor base] on the top rack. But handwashing is probably the best to retain beauty and ensure durability. You should use warm, soapy water to ensure you remove all the remains.

As for the extractor blades, you have to be very careful not to come in contact with the sharp edges. Therefore, a dish brush can come in handy with its handle.

Similar to the traditional blenders, you can also clean the Nutribullet and Ninja blender using their blending power. The method is very convenient, especially if ingredients have dried inside the cup and you don’t have or don’t want to use a dishwasher.

Despite their like heavy-duty and compact design, nutribullet Pro has more color options to consider. If you have a simple taste, the blender is available in blue, champagne, and bands of black [onyx]. There’s also silver, which, of course, is a better option to match with your other kitchenware.

If your utensils consist of colorful designs, the nutribullet is also available in flashy finishes like pink, green, violet, and teal [blue].
This is pretty different from the Ninja Pro blender that mostly comes in a simple black and silver color scheme. Several stores, though, do have the option with the motor base in silver and a scheme of red or blue color.

As shown in our chart, the nutribullet pro blender has a two-serving cup, with a volume of 32 ounces [or 746ml]. This is a third more than the Nutri Ninja pro that has a single-serving cup that holds up to 24-ounce [710ml] fluid.

So, you’ll certainly blend faster for a larger family when using the Nutribullet Pro Blender than you would with the Ninja model.
Performance [Blade System]

Even though they have the same motor power, the overall performance between the Ninja Pro-Series and Nutribullet Pro-Series is different. Yes, they both can pulverize your solid foods and pretty well. But with the Ninja blender, you’re limited to soft materials- the manufacturer don’t recommend dry ingredients.

Ninja says it’s to avoid overheating the motor, but the real cause is the nature of the extractor blade assembly. The blades are pointed and more bent upwards, making it easier for the small materials like grains to slip through without getting in contact with the edges.

On its end, the Nutribullet Pro blade assembly features a combination of the extractor and milling blade. The manufacturer set it that way to solve the inconvenience of the first nutribullet, which required a separate “wet” extraction blade and “dry” milling blade.

So, the owners of the Nutribullet Pro can now process both soft materials and harder grains from a single blade system. Similar to the Ninja series, though, this blender may struggle to work on dry ice. Hence, it may take more seconds to properly blend frozen fruits to a nice ice cream texture.

Both Nutribullet and Ninja blenders are usually available in varying buying options. As such, each selection will certainly come with different components that it works with.

Here is a list of the various accessories included with the Nutri Ninja Pro and Nutribullet Pro Series.

The flip top to-go lids enable you to carry and sip your smoothies or juice with ease. You can also use the four lip rings to efficiently drink from the blending cup without hurting your lips.

Similarly, the Sip and Seal Lids allow you to comfortably carry your fresh smoothies or juices. The lids also have a flip spout that makes it possible to drink from the cup without hurting your lips.

Despite their rich efficiency in slicing through food ingredients, blenders, sad to say, can be dangerous. Especially with the compact personal blender series, their exposed blade assembly can cause injuries very easily.

However, the Nutri Ninja Pro has sharper and pointy blades that can cut through the skin even on the slightest contact. The nutribullet model blades are relatively wide and blunt on the ends. So it’s much harder to cause injuries.

Please note, neither Nutri Ninja nor Nutribullet Pro is intended to crush ice only. If you need to bend some ice, you have to use liquid and not be more than 25% of the total ingredients.

Usually, the price of blenders varies depending on the kind of accessories included. For instance, the Nutribullet Pro is about $20 more expensive than the Nutri Ninja Pro. Of course, the twenty you save can buy you an extra 24-ounce Nutri Ninja Tritan cup if you need it. But for the Nutribullet we can say it’s surely worth it considering it comes as a set of thirteen components instead of eight.

For warranties, both Ninja and Nutribullet makers offer their blenders with a standard warranty of one year. However, you can extend either brand up to five years at a small fee.

In general, both Nutribullet and Ninja blender are great selections if you have limited space or would like to drink self-made juices on holidays. The blending machines have a compact body that doesn’t take up much space and a high-speed motor that can work on most food materials.

More to love, the blenders come with Sip and Seal lids that allow you to drink directly from the processing cups. So, you won’t need to transfer to another container that will require washing afterward.

Even so, nutribullet can make a better option if you’re hoping to enjoy refreshment drinks and prepare some flour from grains. Furthermore, the brand has more color options to pick from, including multiple dull and flashy styles.