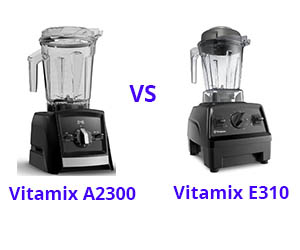 A while back, we did a Vitamix A2300 vs a2500 comparison review, whereby we mentioned the two as the minimalist Ascent Series. In this article, we’ll look at Vitamix A2300 vs E310 to see how they differ in makeup and performance.

The blenders, nonetheless, are from completely different series. So, their stories have most of the chapters different. Yes, both machines have the True Vitamix performance, but there are those specifics the Ascent selections beat the other models.

For instance, all the Ascent blenders have a wireless connectivity feature that enables the blender to receive as many as 17 programs. This includes the model 2300 that doesn’t have the default preset programs like those of Vitamix A2500 or A3500.

In any case, let’s now jump into our main discussion and determine what’s worth having between Vitamix e310 vs a2300. The article will cover the styling, performance, pricing, and also the warranty period. But before then, here’s a quick summary of the blenders…

The Vitamix A2300 is one of the four Ascent blenders that were innovated to provide the users with an outstanding blending experience. Technically, the new line of products redefined both the styling and the blending functions as the engineering team created them from the scratch.

If it’s the appearance, the A2300 has a new profile that stands out from the previous creations. The base has a lovely design, featuring more curves, a clean bevel, and a polished back.

If you fancy classic touch over touchscreens, this blender has physical switches on the control panel. The variable speed knob, however, is bigger and sleeker than that of the Vitamix 5200 and other C-Series versions. Then, there’s a digital timer display that counts and shows the minutes and seconds of manual blends.

As highlighted in the Vitamix E310 vs E320 review, these two are favorable options if you wish to enjoy the Vitamix quality at an economical price. Vitamix introduced the blenders some months after the Ascent series to prove they’ll still be making the machines with the basic settings.

That said, though, the model E310 has everything you need for your blending, and nothing you don’t. If it’s the power, the blender is just like any other full-size Vitamix that has variable speed. You can use it to make the smoothest, sweet-tasting smoothies, and in the case of frozen desserts, it can plow through icy foods in seconds.

Even better, the Vitamix E310 comes with a short, narrower 48-ounce pitcher. So, you can work on the small amounts of smoothies with lesser splashes, and also it’s a bit easier to scrape out ingredients. More on that, continue reading the full discussion below.

Vitamix A2300 vs E310: Comparing the Various Features and Capabilities

As mentioned, Vitamix created the Ascent blenders in a whole new form without replicating any of the past models. The series is the way to go if you want to invest in the future of Vitamix, with a state-of-the-art design.

If you had the models A2300 and E310 on the same table, it’s very easy to disagree the latter is the later model. From a distance, it’s more like the flagship Vitamix 5200, but with a shorter container.

When closer, however, you’ll notice the E310 has some subtle updates to the base, specifically the curved bevel on the sides. Also, the machine doesn’t light up on the controls, and there’s no secondary on-off power button.

Meanwhile, the Vitamix A2300 has everything to smile at, starting with the stylish and smart styling. From all the sides, the blender has a fantastic look, including the back which is more polished.

Sadly, neither Vitamix A2300 nor E310 has the premium metallic finishes in case you’re interested. However, both machines have multiple regular color options available, thereby allowing you to choose the perfect one for your kitchen aesthetics.

For this one, there’s a minimal difference, but it’s still worth noting due to the use of space. What I have as my kitchen is different from what your house includes. So, one of the blenders may work out better than the other in some scenarios.

In any case, Vitamix A2300 (base + container + lid) puts an actual measurement of 8 x 10¾ x 17¼ inches. This is to say the machine will use a slightly larger countertop space than the model 5200 C-series. But due to the shorter height, you can sneak the whole appliance under the standard 18” cabinet without a hassle.

Similarly, Vitamix E310 can fit in most standard cabinets as it has a total height of around 17.7”, with the container and lid on the power unit. It has an almost similar base footprint to its Ascent counterpart. Thus, you can continue using without stress on a limited 360 square inch countertop space.

Regardless of the series, all the Vitamix countertop blenders deliver the same results. The only difference now comes on the prep time, in which case some models are faster than the others.

As for our two subjects, Vitamix states that the model E320 has a 2 horsepower motor, whereas the A2300 has a 2.2-peak horsepower. Hence, a good reason why their power wattage is slightly different in the above table.

Worth noting, the -peak horsepower doesn’t offer continuous support during the blending process. Its addition to the system is to provide the extra boost as the motor starts up or incase it experience some resistance along the way.
The Ascent E2300 has a motor rating and container relatively identical to the Vitamix 750. So, you’ll come to realize its maximum speed is similar to that of the G-Series blenders- approximately 24,000 RPM.

Meanwhile, the blender E310 has a motor like that of the classic 5200 and a slender pitcher. Hence, the blades are also short, which means they will spin at a faster speed than those of the Ascent machine.

Vitamix usually packs the Explorian E310 with a 48-ounce container. True, the volume is 20% less than the usual full-size blenders, but it’s the best when you have only one Vitamix container. Why?

First, 48 ounces is plenty amount of smoothie for many people since the total capacity is equivalent to 5-6 cups. Secondly, this container has a shorter design than the classic 64-oz container and narrower than the low-profile 64-oz container. In other words, it’s a hybrid between the old and the latest containers. So, it’s not only easier to scrape out the sticky ingredients, but also efficient when it comes to blending small batches.

Even so, the Vitamix A2300 has a 64-ounce jar. Thus, you can make larger amounts of smoothies faster and chop much better, courtesy of the wider base and longer blade. Furthermore, the base unit of the Ascent machine has NFC tags, which means you can use it with smaller Ascent-certified 20-oz and 8-oz containers.

The NFC (near-field communication) chip embedded on the Ascent blenders’ base and containers have a proprietary magnetic reed switch that activates the blending. If the container is not properly locked to the base or if you’re using the wrong (Legacy models) jar, the blender won’t run.

While Vitamix creates its blenders to perform, it does so with the customer in mind. All the machines, simple and sophisticated, are straightforward to use.

If it’s the Ascent A2300, the base unit has intuitive controls that comprise physical switches. That’s the central dial for the variable speed, pulse feature, and start-stop paddle lever, which all work nicely.

As the simplest of the Ascent lineup, Vitamix A2300 doesn’t have the default preset programs for auto-blending. Nonetheless, the machine does support smart wireless connectivity, technology via the embedded NFC tags. This tech helps the base to adjust the blending environment as per the mounted Container- specifically the times to auto power-off.

The blender also has Bluetooth compatibility that allows it to communicate with the Free Perfect Blend App to initiate (17) programs. Some of these blending programs you can send to the machine include Smoothies, Hot Soups, Frozen Desserts, Dry Chopping, and Self-Cleanup.

For the Explorian E310, on the other hand, Vitamix didn’t introduce any new or newer features. It has only the basic manual controls, featuring a pulse feature, variable speed knob, and a start-stop switch. Just like with the C-Series, you can use it to perform dozens of recipes, not limited to blending frozen desserts, dry ice, and making hot soups.

Yet again, the Vitamix team innovated the Explorian E310 and E320 for two main reasons: continue the classic lineage and make the Vitamix quality accessible. Of course, the blender is still more expensive than alternatives like Ninja, but it’s cheaper than other brand new Vitamix machines.

That being the case, though, the Explorian blender comes with a (free) standard 5 years warranty, which you can extend up to 8 years.

Meanwhile, Vitamix A2300 is like $100 more on its price tag, but considering what you can do, it’s no doubt worth it. The blender comes with a full (free) 10-year standard warranty. So, you won’t need to pay any additional fees to extend it.

First of all, investing in Vitamix is no loss if you need a high-performance blender that will serve you for years to come. Even with what seems like the simplest models, there are no limits when it comes to plowing through and grinding ingredients.

As for the question of the Vitamix A2300 vs E310, both machines are worthwhile but each has its unique values. If it’s the Ascent variation, it has a range of improvements from the previous models. Not just with the sleek, contemporary design and enticing interface, but also with the integrated avant-garde Self-detect technology.

Also, the idea of the creators adding a wireless connectivity technology on the Ascent series is to enable them to periodically introduce features update. So, investing even in the minimalist model E2300 is buying into the future of Vitamix.

Meanwhile, Vitamix E310 is an excellent appliance if you need an economical high-end blender. It offers the same full performance that the Barnard family has built their reputation on. So, there shouldn’t be any bit of doubt when adding to your basket.