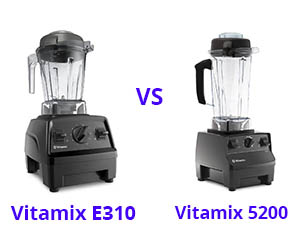 At this point, you know Vitamix is one of the best choices when it comes to a high-performance blender. However, the brand has a wide range of appliances to choose from, and worst of all, many of them are very similar. In this post, we’re going to do a Vitamix E310 vs 5200 comparison review to determine which is really worth investing in.

Nonetheless, the two blenders are more like variants of each other, considering the many features they shar

e, including the physical look. So, you have to be very careful if you’re to make a wise and solid choice for your kitchen investment.

Despite the immense likeness, by the way, these two blending machines are from different product lines. Vitamix 5200 is a member of the classic C-series collection and the model E310 is part of the Explorian line.

Vitamix 5200 is the oldest blender from the brand that’s still in production. As we mentioned in the Vitamix 5200 vs 5300 comparison Review, the company released the C-series in 2007 as a replacement for the model 5000.

The classic 5200 is a simple machine with nothing sophisticated that we can say. It supports only manual blending and uses physical switches that are very easy to use for everyone.

Similar to other Vitamix, this blender is second to none. It has a powerful motor at the core that enables you to perform a wide range of kitchen tasks, including making smoothies, frozen desserts, and knead the dough.

At 64 ounces, Vitamix 5200 can deliver up to 6 or 7 cups of smoothies in a single run. The container has a tall, slender profile that makes it possible to work on small to large batches without any issue.

Furthermore, the container comes with a food-grade tamper to help push the ingredients into the spinning blades without having to stop the motor. Learn more to see the video

If you need a high-end blender on an economical budget, the Vitamix Explorian series is a good place to start. The product line is the most affordable product line from the brand, but still a solid performer.

If it’s the Vitamix E310, for instance, it has all the essential features you need for a delicious smoothie or great frozen cocktail. The blender packs a 2 horsepower motor, which, of course, is slightly lower than the newer series but powerful enough for all your culinary tasks.

It has all physical controls, including a dedicated pulse feature and a central knob to adjust your blender speed. (There’s no automated blending in case you may need the feature).

Still, this blender comes with a 48-ounce jar, which is slightly small, for sure, but pretty enough for many people. The container has a short, slender form, which means you can do what you can’t with the classic 64-oz and low-profile 64-oz jar.

For more details, let’s now jump into our Vitamix 5200 vs E310 full review and see how these machines relate side by side. The article will focus on all the major aspects, including styling, power, performance, and controls. So, hopefully, you’ll find it informative and helpful for your situation.

Vitamix E310 vs 5200: Comparing the Various Features and Capabilities

As we noted earlier, Vitamix created the Explorian E310 and model 5200 with most of the features similar. So, we’ll start on that, then look at the few things that distinguish each from the other.

Vitamix E310 and 5200 are the closest to each other when it comes to physical appearance. The shape of the motor base is mostly the same, including the basic controls and the air vents on the sides. Hence, the reason the noise level when blending is noticeably the same value.

Both blenders are identical to other full-size Vitamix that has a variable speed setting, whereby you can use to perform various tasks. They have a 2.0 horsepower motor that can achieve up to 37,000 RPM maximum speed on full throttle.

Furthermore, Vitamix 5200 and E310 comes with a narrow blending container. So, they’re much convenient when making small amounts of sticky recipes (like butter) than the low-profile containers.

Like we’ve just said, both Vitamix E310 and 5200 has a 2 horsepower motor at the core. This is the motor size that the engineers designed specifically for the narrow containers since the blade don’t take that much effort to spin.

If you have the chance to take power measurements of the two, you’ll come to notice their maximum speed is the same. This is so as the containers of the blenders have identical blade diameters, thus they cover the same distance per rotation.

That said, nonetheless, Vitamix 5200 does have the peak horsepower boost to help handle the startup resistance or incase the motor stalls. So, you may notice it does achieve the maximum speed a few seconds faster since the motor has the advantage of starting at a higher thrust.

All the two Vitamix blenders consist of a professional-grade construction, featuring only premium materials. The company creates them to help you in blending tasks and for a long time. Hence, the reason they even offer a longer warranty service than other alternatives in the market.

Vitamix E310 and 5200 C-Series have an industrial-strength base, with a tough plastic housing. The bases have air vents on the side from where the integrated fan blows out air to keep the motor environment cool. And in case of overheating, there’s an automatic protection microprocessor that stops the motor to cool down.

The Vitamix appliances have an all-metal drive system that connects the jar to the power base. Also, the blades at the belly of the container are all hardened stainless steel. So, they won’t rust, plus you can continue using on the toughest ingredients for better blends and many years.

All Vitamix blenders are quick and effortless to clean, regardless if they have the self-cleaning program or not. You don’t even need to remove the retainer nut and blade assembly from the container as it can clean itself using the motor power.

In doing so, you just need to half-fill the blending jar with warm soapy water. Then, let the motor run for 30 to 60 seconds while at high speed.

Please note, you should clean immediately after removing all the content from the container to avoid the remains sticking on the walls. Vitamix doesn’t recommend putting the container or components of the blender 5200 in the dishwasher. But if you have the Explorian E310, you can use it on the top rack compartment where the heat is minimal.

Despite their closest likeness, the E310 has some subtle touches that we don’t see on the classic 5200. The blender came about a year after the futuristic Ascent blenders that have advanced wireless technology and touchscreen controls.

But since the Ohio-maker wanted to show it’ll still be offering the basic models, the Explorian didn’t come with either of these newfangled features. It only borrowed some styling of the base, involving the lovely curves on the sides. The machine is available in black red, or slate finishes.

On its end, Vitamix 5200 (and other Legacy models) has smooth sides. The blender is available in three standard colors, namely black, red, and white. It did have two premium metallic finishes a while back but they’re unavailable at the moment.

Like many countertop blenders, these two models are large but not that much. Vitamix 5200 has a base footprint of 8.75 by 7.25 by 8.25 inches (depth x width x height) when the container is not mounted. Once you mount the jar (and lid), however, the whole blender system will have a total height of 20.5 inches.

For most households, the kitchen cabinets are usually 18 inches high. So, it’s pretty impossible to hold your blender 5200 while the container is still on.

With the Vitamix E310, however, the issued container is pretty short- approximately 9¼ inches. This gives a total height of 17.5 inches, which can perfectly fit under the standard 18-inch kitchen cabinets.

Vitamix E310 comes with a 48-ounce blending container, which delivers between 4 to 5 cups of smoothies. The capacity is about 2-3 cups lesser than the full-size 64-ounce container, but 48 ounces are still plenty for many people.

More to that, this container has a shorter profile than the classic 64-oz jar. Hence, the reason it allows the blender to fit under the standard cabinets without a hassle. The shortness also makes it easier to scrap sticky foods out and clean with hands.

The model 5200, on the other hand, has the classic 64-oz, with a tall form. Even though it isn’t much, the extra capacity is undeniably worthwhile if you’re hoping to be blending large batches. On the downside, however, the container is very tall to fit under 18-inch storage while mounted on the base.

Regardless, both the Explorian and 5200 containers have a slender body, which means that they work better for small amounts. The two also share a 3-inch blade due to the narrow bottom. So, they’re not as good as the wider jars for chopping tasks.

Neither the Explorian E310 nor Vitamix 5200 has the support for automated blending. Both appliances have only manual blending using physical controls- a perfect option for even the visually impaired.

Nonetheless, the E310 has two things that stand it out from its counterpart; a dedicated pulse feature and a full-range variable speed knob. Both features are a great addition in any blender as it gives you better control when working on different textures.

Meanwhile, the model 5200 also do have a variable speed setting, but without the full-range option. It has a High/Variable switch that requires you to switch for the kind of speed adjustments you would want to make.

More on that, the C-series blender lacks a dedicated pulse feature. So, you would have to improvise with the Start/Stop switch if you have a dish that needs blending in short pulses.

Vitamix offers the E310 at a slashed price than the other entry-level blenders. As for our case, the blender is about $100 cheaper than the flagship model 5200. So, it can be an excellent choice if you need a budget-friendly high-end blender but don’t want a refurbished design.

Unfortunately, the Explorian comes with a standard 5-year warranty, 2 years less than the Vitamix 5200. On the bright side of it, both machines support the expansion of the warranty for three more years at a small fee.

Technically, all Vitamix machines are worth owning if you’re up for the pricing. For the past 70+ years, the company has been creating its products with a customer in mind and very keen on every detail.

When deciding between Vitamix E310 vs 5200, though, the blenders are mostly identical. So, you have to know exactly what to expect to avoid any disappointments later on.

If it’s the classic 5200, the blender has the advantage of a larger container that can come in handy in large amounts. Also, many people feel the quality of the blender is relatively sturdier than that of the newer releases. Hence, the reason many owners are still preferring it for their household use.

However, a significant population feels the blender has a high price tag than what it offers. True, its quality and long warranty remain unbeaten, but at that budget, we’d hope the machine to have at least automated blending functions.

In any case, Vitamix E310 is much affordable and functions nearly the same as the C-series. So, it can be a better option for you who can’t be able to raise $450 for a blender at once.