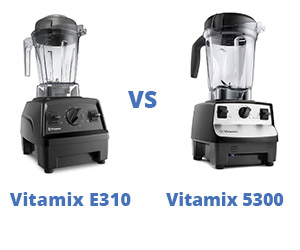 In this article, we’re going to break down Vitamix E310 vs 5300 to determine which blender is the best to invest in. The two are great machines if you aren’t interested in fancy features like touchscreen controls or innovative wireless technology. But they are from two different product lines. So, each has unique qualities that the maker hoped to deliver to your blending.

Nonetheless, Vitamix E310 is a much better option if you’re only interested in blending with a high-power blender. The reason I’m saying this is because:

Why Vitamix E310 is a better choice

If you can remember our last talk on Vitamix 5200 vs 5300, we concluded these two are the closest to each other. The latter was first on the market in late 2014, whereby the maker hoped to replace the former for the basic style of the classic series.

As you know, however, many people are still into the blender 5200, in which case it proved hard to replace. So, Vitamix made the model 5300 just another lineup in its catalog, featuring the newly-designed low-profile container.

However, the new blending jar has longer blades (4” instead of 3”) that would take more effort to spin. Thus, borrowed the 2.2Hp motor from the Next-Generation “G” series, as well as the microprocessor speed control to protect the wider container at high loads.

Meanwhile, by 2017, a lot had changed when it comes to technology. Many gadgets had left the physical controls for touchscreens, and wireless technology had become a norm for many. From the inspiration, there came the Ascent Series blenders that redefined the whole form of high-power blending.

At this point, many fans of the maker believed all the future blenders from the company will have the newfangled features, specifically wireless technology. But in just a few months, Vitamix unveiled the Explorian family, comprising E310 and E320, which all have only the basic features. Hence, establishing the story of the classic design still will continue.

Long story short, Vitamix E310 is still as powerful as any other full-size blender from the brand. However, it comes at unprecedented pricing that was worthwhile to thousands who couldn’t afford over $400 for the brand new piece of the previous makes.

Vitamix E310 vs 5300: Comparing the Various Features and Capabilities

Despite their classic nature, Vitamix 5300 and Explorian E310 differ in some ways. Here’s a comprehensive review of the similarities and differences between the two.

Technically, the Explorian blenders have a body style closest to the G-Series models, but without the redesigned air vents. However, the E310 and E320 have some lovely updates on the motor base, featuring the curved bevel on either side. The designers took the side accents from the Ascent series

Also, Explorian has a broader control panel so that it can perfectly accommodate the larger controls, including a speed dial, pulse, and start/ stop switch. This is quite different from the model 5300 that has smaller triggers, albeit large enough to hold with ease.

Similar to the flagship 5200, the C-series blender has smooth sides and classic air vents all around.
Regardless, both the Vitamix E310 and 5300 are only available in standard colors. None has a premium metallic finish in case you may be interested.

What size is your kitchen? If you have the standard 18-in cabinets or more, either of the two blenders can fit without a hassle. They both measure below 18 inches in height (when the container + lid are locked at the base) since they have a shorter container.

If it’s the workspace, both machines take a significant tabletop surface like any other countertop blender. However, Vitamix 5300 has a slightly smaller base footprint (as shown in the table). So, it will occupy an unnoticeably lesser space than its cousin.

When it comes to using Vitamix, the blending results don’t matter which motor size is behind the hood. They all deliver the smoothest smoothies, fine flours, and hot soups.

However, the classic 5300 has the 2.2 horsepower engine that was designed for the Vitamix Pro 750 and other G-series blenders. As I mentioned earlier, the reason for this is to generate power powerful enough for the longer 4-inch blades. The motor also does have the same microprocessor speed as the G-series to protect itself when carrying high loads or running at very low speeds. 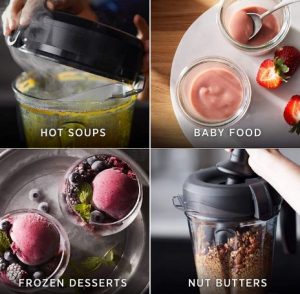 On the other hand, Vitamix E310 has a 2.0 horsepower motor since its jar is almost similar to that of 5200 but smaller. The container has a narrow bottom that accommodates 3-inch cutting blades, thus, doesn’t require as much effort as the blenders with the low-profile pitcher.

In any case, all Vitamix motors have a self-cooling fan attached to ensure a favorable working environment.

YES, all the blenders have a central knob that counts up to 10 incremental speeds. Thus, you can easily adjust to your preferential setting and achieve a wide range of textures with complete control.

Unlike with Vitamix 5200, the two blenders have a full-range variable speed knob that needs no second button to activate or deactivate. The machines also have a slightly soft-start in that the motor quickly ramp-up in case you start at Maximum speed. This is different from the famous 5200, which will start at the same high speed selected on the dial.

All Vitamix blenders can blend in short pulses, regardless if you’re using the older or latest models. The only difference is that some machines have a dedicated pulse feature while others don’t.

As for our picks, both Explorian E310 and classic 5300 have a predefined pulse lever on the left side of control board. As such, you can better achieve any recipes, including chopping vegetables or making thick pesto sauce and others that don’t need complete liquefying.

While the Explorian E310 and Vitamix 5300 have a short container, they both consists of a different design. The latter has the 64-oz low-profile jar that’s wider at the top and bottom. True, it’s a big advantage as you can blend 6-7 cups of smoothie for a whole family and you can chop much better due to the wide bottom.

However, the extra width also does have issues worth mentioning- can’t blend one cup/ single-serve portions properly and high risk of splashes when making small splashes. Of course, the two are not serious issues if you’ll be using the blender for large amounts of blends. But if you’re likely to prepare single serve amounts or nut butter often, you might need to get an extra smaller container, such as the 32-ounce wet jar.

If you have Vitamix E310, however, you’re going to blend a maximum amount of 4-5 cups, but you can also work on small batches. The 48-oz jar has a slender profile that allows to smoothly work on amounts less than 2 cups.

Furthermore, you can blend sticky mixtures with less splattering on the walls. So, you won’t need to use a tamper as many times as you would with the 64-oz low-profile container.

That being the case, though, the Explorian E310 container is narrower at the belly. Thus, less efficient in chopping tasks as the materials don’t have enough space to turn over.

Both Vitamix E310 and model 5300 are straightforward to start and operate. They don’t have a complicated set up like that we see on the Ninja kitchen system (removable blades and so many locks to click). Also, the blenders are by default high-performance. So, you won’t need to further chop or break down the ingredients as with Oster and the rest of the regular blenders.

For this reason, you can have a fresh, silky smoothie in about 10 minutes, including the time of preparing the machine and ingredients. For the blending part, the blender takes only 30-60 seconds to fully pulverize the material.
Even so, none of the two blenders have preset programs, remember? So, you can’t have the fun of “walk-way” blending or multitask.

Vitamix created blenders E310 and 5300 with the same classic design as the model 5200. The only thing the engineers added from the newer makes are the styling accents, but no noise reduction technology or metallic housing. So, our two blenders are pretty loud (97-104 decibels) while blending at maximum speed.

At the lowest speed, however, Vitamix E310 is much quieter since the motor has a .2 horsepower blast less. However, it’s not the best idea to run your blender at low speed for long as it has higher chances of overheating.

Besides the aforementioned features, Vitamix E310 is one of the brand’s machines that has the lowest prices when brand new. If you don’t mind the smaller 48-oz capacity (enough for most of us), the blender is no doubt worth having. Not only does it solve your blending worries at less, but also you might not need to invest in an extra container.

Moreover, the Explorian model still has the same performance punch from Vitamix. You can use the machine to perform any other task we’ve come to expect and love from the brand, including grinding nuts/ coffee, frozen desserts, hot soups, and mixing dough.

Even so, if you compare Vitamix 5300 vs e310 at chopping, the latter wins, thanks to the wide container. The classic blender also comes with a standard (free) 7 years warranty, which means you have extra 24 months to enjoy free replacements.

The Explorian has a shorter warranty (5 years) but that we all can agree is for the bucks off its price tag.