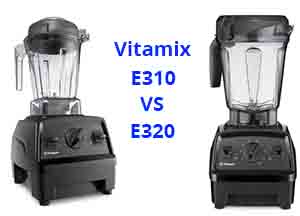 The Explorian blender line is the answer if you wish to enjoy the iconic Vitamix quality at an unprecedented price. If you review Vitamix E310 vs E320 side by side, you’ll realize the machines are solid performers like the previous models- only that they’re more affordable.

The renowned maker released the new series in 2017, just a few days after introducing the four futuristic Ascent smart blenders. But the Explorian blenders don’t have capacitive touchscreen controls, Bluetooth, or wireless NFC technology. They have the previous classic design, with just the basics for the blending.

So, it’s right to say Vitamix released the models E310 and E320 not only to make its label more accessible. But also to prove it would still be making and selling the classic models.

That said, let’s now try and identify the key similarities and differences between Vitamix E320 vs E310. Then, afterward, you can have a definitive decision on which will better suit your needs.

Like I have just said, the Vitamix E310 is one of the latest releases designed to bring you Vitamix’s high performance at a lower price. While it came almost at the same time with Ascent Series, this blender didn’t introduce any new features. However, it does have everything you need to explore your culinary adventures, including a powerful motor at the core.

In terms of performance, the Vitamix E310 is identical to other full-size blenders from the Ohio manufacturer. It has a pulsing trigger and variable speed control dial, which means you can make the smoothest smoothies in less than a minute.

Also, the blender has hardened aircraft-grade stainless steel blades, thereby enabling you to blend up ice and frozen desserts in seconds.

Similarly, the Explorian E320 blender comprises a simple model, with solid performance and a more friendly budget. It has the classic motor base but with some subtle styling improvements on the sides. At a glance, the model appears like an updated Vitamix 5200 C-Series, with a pulse feature and a low profile pitcher.

In the real sense of it, the Vitamix E310 is, therefore, a remake of the model 5300 introduced in 2015. Both machines have a shorter 64-ounce container, which the engineers designed to counter some of the issues with the tall classic jar.

Even so, the E310 Explorian-Series lacks the secondary on-off power switch, but it does have a 7-year warranty.
For more details on the speed and noise level, continue reading the full comparison review below.

Vitamix E310 vs E320: Comparing the Various Features and Capabilities

Truthfully, Vitamix E310 and E320 Explorian-Series have so much in common. Here is a summary of the various shared features, starting with the most obvious one.

Technically, there’s no visible difference in the design of Vitamix E310 and E320. Both machines have a classic [C-Series] base shape but with a curved bevel on the side. These are the side accents that Vitamix added to the Ascent models to harmonize with the fancy control panel.

Both machines have a basic control panel, featuring physical pulse and start/ stop switches, plus a speed control dial. However, none of the models have a secondary power on/ off button like that of Vitamix 5200.

Similar to the styling, Vitamix designed the motor bases of the Explorian blenders with identical dimensions. Both models have a footprint measuring 11 by 8 inches, which means you can comfortably use on that standard kitchen countertop.

More on that, Vitamix E320 and E310 have a short blending container. When the jars are mounting on either base, the blenders [from foot to the lid] measures around 18 inches. So, you can slip under most standard kitchen cabinets without a hassle.

When it now comes to the power, there’s some kind of confusion between Vitamix E320 vs E310. Hence the reason I even left the table blank.

On the company website, Vitamix.com, the sections of the specification show that E320 has a 2.2 horsepower motor, whereas E310 is 2.0 horsepower.

Meanwhile, the user manuals from the manufacturer show that the two motors have a similar electrical rating- 12amps. Furthermore, the nameplate printed on both handbooks indicate model VM0197 on each. This number usually corresponds to that one embedded on the machine [mainly on the back], meaning the bases are identical.

Despite the shared power, though, Explorian E310 tends to spin the blades at a slightly faster speed than the model E320. This is so as the blenders have varying container width and blade diameter.

Performance-wise, all Vitamix blenders are the same. The engineers usually install the machines with a powerful motor and tough blades that can plow through any materials. Whether it’s the softest vegetables or the toughest ice cubes, the brand enables you to prepare your recipes with high precision.

As for the two Explorian models, they both have variable speeds of up to 10 and a pulse feature. So, you have the option to refine every food texture with optimal control, for the best results. And if you do leave your blender running for 5-6 minutes, it can make steaming-hot soups that are ready for use.

Other culinary you can make with your Vitamix e310 and E320 include frozen desserts, icecreams, nut butter, dips, and other food-processor tasks.

In simple words, all two Vitamix Explorians are straightforward to use. Similar to the previous Classic C-Series blenders, you just need to load your pitcher with the ingredients; close the lid; and switch the machine on.
Like I have always said about Vitamix [or any other brand], your blending should always start at the lowest speed.

Most preferably you should leave the dial pointed at speed 1, then increase it through 10 during the blending cycle.
Note, neither Vitamix E310 nor E320 has preset programs. Thus, you’ll have to rely on manual controls for all your blending and food-processor needs.

As mentioned, the Explorian blenders are closets to the classic C-Series base design, only with some additional side curves. Neither of the two included models has the improved airflow design or vibration dampening technology that the Legacy G-Series has. So, I won’t lie the models E310 and E320 are quiet when blending ‘cause they’re not.

Both blenders have a very powerful motor, in which case they’ll vibrate more and make quite some noise. Their noise levels fall around 97 decibels, just like the previous C-Series. Hence, you might find it kind of bothersome- especially if you’re noise sensitive.

As a standard rule, all Vitamix blenders are easy to clean, and so is the Explorian Series. If it’s the base, you only need to wipe with a warm damp cloth, then use a dry, soft cloth to wipe it clean.

On the other hand, Vitamix containers have self-cleanup, in which case you won’t even need to remove the retainer nut or blade assembly. You just need to half-fill the pitcher with water [warm] and add a few drops of dish soap. Then, blend the mixture for about 45 or 60 seconds and rinse.

Remember neither of the blenders has an auto-blending feature. So, you have to be physically present not to come and find your blend has to turn into a hot soap soup.

Again, Vitamix creates their blenders to perform and for a long time. This has never changed with either of the new releases, not even our models E320 and E310. The two have a well-made design, with a tough plastic base to protect the motor against harsh external elements like water.

Meanwhile, the motor also has a heavy-duty construction, integrated with a radial cooling fan and thermal protection system. Hence, can continue serving your culinary needs without the risk of burning out.

Still, the blending container also comprises a high-quality design, featuring a hardened stainless steel blade system. Thus, you can blend with your machine every day for so many years.

While they’re not very many, here are the things that differentiate Vitamix E310 and E20 from each other.
Container and Capacity

Even though they both have a short container, Vitamix E310 and E320 comes with different capacities. The former, which in this case is like the modest includes a 48oz container, which is some points narrower than the 64oz low-profile container. So, it can handle small amounts of smoothies pretty well.

Thanks to the shorter height and wider mouth, the model E310 container is very easy to scrape out the ingredients. It, however, has a narrower bottom, meaning it won’t chop as faster as the Vitamix E320. This is so as this one has a 64-ounce low profile pitcher, featuring a shorter and overall wider style.

So, the bottom of the jar has enough space for the ingredients to make better contact with the blades. Furthermore, the 64-ounce container can blend more amounts at once than its counterpart. It, however, can’t handle small batches as efficiently as the 48-ounce container.

Since the two Explorian versions have similar power output, therefore, the model E310 can spin its blades much faster. In which case it can blend the same amount of model E320 in several seconds less.

Meanwhile, the longer blades of the Vitamix E320 are also useful as they can generate more friction. So, the blender is likely to make hot blends in lesser time.

Lastly, Vitamix E320 is a few dollars [about $50] more expensive than its sister model E310. The reason for this is because the blender has several added advantages that its peer lack. One of these extra features is the larger capacity, i.e. 64 ounces. The second is the warranty support, whereby the Explorian E310 has 5 years [free] but E320 has up to 7 years [free].

That said, though, these two systems are the most affordable Vitamix yet. Yes, they’re still on the high end of the scale but they cost less than other blender lines from the global provider.

If you feel the price of a brand new Explorian is still high, Vitamix has a generous offer on the reconditioned products. True, some people are hesitant to buy refurbished items but for Vitamix, the company usually conducts rigorous tests to ensure the product is worthwhile. The brand even offers encompassed models with a solid 3-5 years warranty, which you can even upgrade in most cases.

Usually, the perfect blender for you depends on your needs or what you’re hoping to achieve. If you need the quality of Vitamix but you don’t have five hundred bucks at hand, the Explorian blender line can be your starting point. The two blenders, E310 and E320, from the lineup cost between 320-400 dollars when brand new. Then, you can pay around $260 for the reconditioned makes.

Both appliances no doubt are high-performing, plus they have a short blending container. So, they can easily fit under the top kitchen cabinet while the container’s still sitting on the power base.

If you have a larger family, though, Vitamix E320 might be a better option for you. The blender comes with a 60-ounce container, which means you can start preparing large amounts of smoothies right away. You won’t even need to make any other purchase unless you would want a dry-blade container for milling grains.

Another thing, the blender comes with 7-years warranty support instead of 5 years. So, you can continue receiving free repairs and replacements from the maker [at no cost] for a longer time.