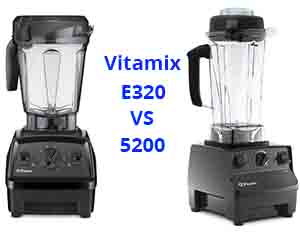 Like I have mentioned several times, the best blender for you depends on your needs, as well as preferential liking. Unlike some bloggers, therefore, I can’t tell you that’s best between Vitamix E320 vs 5200 since I don’t know what’s in your mind.

However, what I can share with you in this post is everything you may need to know about these two blenders. That’s how they look, use space, perform, make noise, pricing, and how long each can last.

The good news about the performance and durability, though, is that Vitamix makes it uniform across all the full-size blenders. And these two falls within the category, which means the blend results are identical. The one thing that will change is the delivery time, which in this case might be more or less depending on what you’ve got.

Long story short, let’s now get closer to our countertop and compare Vitamix 5200 vs E320 to see the model that might be better for you. Like always, we’ll first highlight a summary of the two blenders just in case you don’t have the time to read the whole review.

Vitamix launched the blender E320 in the last quarter of 2017. It’s part of the Explorian lineup, which includes the model E310 that also came during that time. Before the release of the blender line, Vitamix had just introduced its space-age series- Ascent that has touchscreen controls and inbuilt wireless technology.

Different from the Ascent models, though, the Vitamix E320 has the classic [C-Series] motor base, featuring a basic control panel and physical switches. Among these switches is a pulsing button that allows you to blend your mixtures in short intervals for maximum precision.

More on that, Vitamix E320 has a powerful 2.2 horsepower motor that blends even the toughest ingredients in seconds. Sadly, however, this blender doesn’t have automatic blending. Thus, you have to do all your blending and processing manually.

This is the Flagship Vitamix that took over the legendary 5000 in the mid-2000s. It’s the oldest series from the Ohio maker that’s still on the store shelves due to its influence on the users. In fact, the blender has also inspired most of the later series from the American creator, including the Explorian model we’re discussing.

At a glance, Vitamix 5200 has a simple design, but with a powerful motor and multiple speeds setting at the heart. So, it can continue blending even the toughest ice and grains to a fine texture and for a long time.

Speaking of blending, this blender has the standard classic 64-ounce pitcher that can handle small to large batches without stress. More on that continue reading the brief comparison review below.

Vitamix E320 vs 5200: Comparing the Various Similarities and Differences

While Vitamix 5200 and E320 are from different platforms, they both have a classic motor base. Like I mentioned, the model 5200 has inspired very many Vitamix series, including the G-Series and the Explorian models. For this reason, you’ll notice the blender E320 is identical to its counterpart in many ways.

The first likeness you’ll notice is on the base, whereby the two machines have the classic styling and basic controls. For the model 5200, however, its design is too plain, with flat sides. This differs a little with the Explorian E320, which has some fine curves [borrowed from Ascent series] on the sides.

In any case, the curved bevel is not exactly a game-changer as it didn’t include the noise dampening technology as we’d expect.

If you fancy flashy designs, Vitamix is not a big fan of them. For the years I have known the label, the bright finishes mostly used by the global label is red and white. The rest are professional and metallic colors.

With the Vitamix E320, for instance, you can get the blender in either black or red finishes. It doesn’t have true metal or other standard colors that you can choose.

On the other hand, model 5200 has more color options, including Black, Red, white, platinum, and brushed stainless. The last two are metallic finishes, meaning they have a higher resistance to wear due to the liquid-metal treatment.

For this one now, there’s a significant difference that’s worth noting, particularly if you have limited kitchen spaces. It all starts with the Vitamix 5200, which has the original classic motor base and container that the newer releases replicate.

On its end, Vitamix E320 has the new 64oz low-profile pitcher, featuring a shorter but wider design. While mounted on the base, therefore, the blender and its container can easily fit under the 18” kitchen cabinet without a hassle.

Even so, the Explorian model has a slightly wider base [ 8 x 11 inches] to match with the container.

Again, Vitamix engineers designed blenders E320 and 5200 with varying containers. Of course, the capacity is similar- 64 ounces. The difference is with the layout, in which case the celebrated C-Series is tall and slender while its cousin is shorter but wide. So, the blending experience from either is unique even though the results are pretty identical.

As a matter of fact, both containers are pretty capable of handling medium to large amounts of smoothies. If you would prefer Vitamix 5200 and its tall-narrower pitcher, you can even blend small batches without splashing your mixture. This is something you would find tricky when using the wider container of the model E320.

Even so, this wide low-profile jar has its values too, besides the ease of storage. One of these benefits is that you can scoop out your butter or any other sticky blend much easily. The same applies when you’re cleaning your pitcher by hand since the jar is also wide at the bottom.

Another thing is that Vitamix E320’s container is more efficient in chopping vegetables. This is so as the wide pitcher has enough room for the materials to make contact with the spinning blades.

That said, though, all full-size Vitamix containers have the patented container that tends to blend by creating a vortex. Hence, delivering smoother textures and faster than other blender brands.

All Vitamix comes with aircraft-grade, laser-cut stainless steel blades. The single thing that differentiates the various models is the diameter, in which case the wider container is larger.

So, if you have Vitamix E320, the container comes with longer 4-inch blades. This helps enhance chopping since there’s enough space to fall on at the bottom and longer blades to capture them.

Still, the long blades can generate friction more friction in a short period. So, you’ll likely notice the container can heat soups a few seconds faster than the standard classic pitcher. This is so as this tall container has a 3-inch blades diameter.

Vitamix often offers its countertop blenders with a wet-blade container that’s specifically for processing liquids and soft ingredients. The container type can also make you ground coffee, flour, and other product powders. However, if you’ll be milling regularly, it’s better to get a dry-blade container to ensure each can do what needed of it.

All the two Vitamix blenders pack a powerful motor that allows you to perform a wide variety of culinary tasks to consistency. Nonetheless, the model E320 is about .2horsepower higher, which means it can do heavier blending pretty faster.

Even better, the Explorian has larger blades that tend to do more work in each revolution made. So, it certainly will heat ingredients much faster.

As for the question of speed, however, Vitamix 5200 has shorter blades, in which case they cover a shorter circumference per revolution. So, the machine spins the blades pretty faster, specifically when blending low loads.

When both blenders have a high load to work on, though, you’ll certainly notice the maximum speeds will fall at the same point at some point. Vitamix 5200 has lesser power, which means the extra load will decrease its initial speed when processing a lighter load. Then, the blender E320 will only drop its speed slightly since the motor’s relatively stronger to handle high loads.

The two Vitamix blenders are so easy to get to work and operate. They are “old-school” yeah, but they’ve got intuitive controls that need no special training to use. The panel has all physical switches, including for start/ stop and the dial for adjusting the speeds.

Even so, the classic 5200 doesn’t pick the variable speed commands like other later releases. It has a “High/ Variable” switch that you need to play with to activate multiple speeds. The blender, nonetheless, lacks a defined pulse button. So, you’ll have to improvise with the start lever if needed.

Meanwhile, Vitamix E320 does have a pulse feature that you can use when preparing delicate blends. Also, it has a full range of speed control that adjusts instantly without needing any activation.

Like I mentioned, blenders E320 and 5200 have the classic motor base. They don’t have the updated airflow design or noise dampening technology like that of the G-Series systems. So, you may find the motor quite loud when blending materials for sure.

Regardless, they are blenders and that’s their nature. So, you just have to adapt or use other tricks to counter the noise such as aftermarket covers or earmuffs.

Both Vitamix E320 and 5200 C-Series are fast and straightforward to clean. They have a self-cleaning feature that enables you to clean by only blending a mixture of soapy warm water for 45-60 seconds. Then rinse and dry.

Even so, your blending container will require hand-washing once in a while to remove the remains that might be trapped on the corners. And for that, you’ll find the model E320 much easier due to its short and wide container.

Although supposedly it’s the lesser Vitamix, blender 5200 is a couple of dollars more expensive than the model E320. The older model is also preferred by many even with the tall container as they believe it’s better well-made and durable.

But at the cost, both machines come with a seven-year warranty that covers the components, performance, and return shipping fees. Thereby reflecting Vitamix’s high quality and commercial-grade performance.

When it’s about quality, there’s no significant difference between Vitamix E320 vs 5200. They both have a very powerful motor and hardened stainless steel blades that make it possible to blend smoother smoothies and in less time.

Also, the classic C-Series has directly inspired the Explorian model, which is why they both have the older classic base. Furthermore, the appliances have the basic control panel that has the old-school controls, featuring physical buttons.

Even so, Vitamix E320 has a pulsing button that you might find useful when preparing salads and other mixtures that don’t need liquefying. Also, the series has the low-profile container that the engineers introduced to counter the common issues with the previous standard tall container.

If you respect the old creations as I do, however, you might appreciate owning the Vitamix 5200. The series is the pioneer of almost all the newly released series, including the Explorian blender line. And like with any other original machine, this blender presumably has better construction. Hence, one of the reasons many people are still looking for it even when it lacks the kind of technology newer makes possess.

Well, that’s all for now and I hope you’ve found this article with everything you were looking for on Vitamix 5200 and Explorian E320.

As Pamela and the young mom of “all sweetness”, keep tuned in to get more of my comprehensive and unbiased Vitamix blenders.