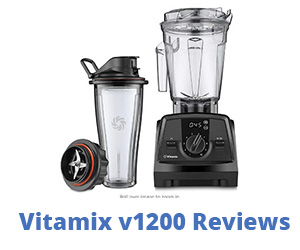 Do you usually blend different amounts now and then? Or would you want to use your blender as a real food processor? Well, the line of Vitamix Venturist can do handle these two and even more. It’s closest to the smart Vitamix Ascent blenders, albeit not in every aspect.

As a full-size blender, Vitamix V1200 delivers high power that the Ohio maker has built its reputation on. But it does use the newer low-profile pitcher, thus the motor rating is slightly higher than the classic Legacy models like Vitamix 6300.

Even so, the Venturist is about thirty more expensive than the smartest Ascent A3500. But, is it really a worth buy, or should just stick with the Explorian family and pocket that extra two hundred.

Well, these are the questions we’re going to answer in this Vitamix v1200 review. But before then, let’s quickly highlight some of the best features the machine holds.

The Top 5 Reasons You Should Buy Vitamix V1200

Last time when talking about Vitamix v1200 vs A3500 blender, I did mention about Costco-Venturist relation. Vitamix primarily innovated the machine for the American store. It was until days later we saw the blender appear on the manufacturer’s official site.

In any case, let us unbox this blender and see whether the beauty is really worth its price.

When brand new, Vitamix V1200 usually comes with more accessories than the other blenders from the brand. In the box, you’ll find the power base, full-size (64-Ounce) pitcher, tamper, cookbook, tamper holder, under-blade scraper tool, plus 20-Ounce and 8-ounce blending cups.

The other Vitamix blenders, including Ascent models, only come with a tamper and cookbook. If interested in any of the extra tools, you’ll have to get them separately.

That being the case, however, the reconditioned Vitamix v1200 is what you’ll find in most retail stores at the moment. It’s a great alternative as the machine will be a few dollars cheaper, but, sadly, you’ll also get fewer accessories. As for the case of Amazon Renewed, you’ll miss an 8-ounce blending cup, scraper tool, and tamper holder.

The Look: Classic plus Modern

Aesthetically, Vitamix V1200 is a hybrid between Ascent and the legacy Vitamix models. When you look at the blending base up close, you’ll notice its unique elegance, yes. But the front panel design is closest to that of the Vitamix 7500, only that this has a larger variable speed dial and a timer display. It doesn’t have the signature curved bevel on the Ascent models, but it does feature their back air vents.

Another thing, the Vitamix Venturist is available in only the standard colors. So, no premium metallic finishes like those of the Pro 750 G-series if interested.

Like any other full-size Vitamix, Venturist v1200 doesn’t disappoint when it comes to power. It packs a 12amps, 2.2 horsepower motor that’s muscular enough to pulverize any food materials you feed its berry. Even better, this engine has a peak power that works like a turbo boost for when the blender encounters some resistance.

Moreover, V1200 has a 10-incremental variable speed that can be very helpful when making different textures. The speed knob offers full-range control, unlike my classic Vitamix 5200 that needs adjusting the “High/ Variable” lever.
But again, all Vitamix full-size blenders deliver the same performance and result. So, you don’t have to worry that yours show a lesser speed/ motor size rating.

The Container: Strength or Weakness

Again, Vitamix V1200 usually comes with a 64-ounce low-profile jar and the personal blending cup/s. Thanks to the NFC technology installed, the motor base can detect and adjust so that it can operate the different containers. So, you don’t need to use the personal cup adapter that the Legacy blender line uses for the single-serve blending.

Nonetheless, these cups don’t have the means to use with a tamper. So, you’ll have to rely on the large pitcher for not just large blending, but also when preparing sticky blends, like batter. This, however, could be a little inconvenient, if I may say.

In the previous classic container, the tallness pairs with slenderness, and this makes it possible to process small to large batches. Meanwhile, the low-profile container came in a shorter style, thus, the engineers had to widen a bit to recover the ounces cut from the top.

While it does everything as expected, the extra width makes it harder to handle smaller blending requirements without splattering. If it’s nut butter, therefore, you need at least 4.5 cups of nuts instead of 3 cups (with a narrow container). Furthermore, you’ll find yourself using the tamper more as you try to push the materials on the corner into the blades.

But again, the extra width does have a positive impact that lacks in the narrow containers. Since there’s much space at the bottom and the blades an inch longer, the ingredients can turn smoothly. Hence, more efficient in chopping tasks.

The Size: How does it use Space?

Thanks to the low-profile container, Vitamix v1200 can fit in the standard 18-inch kitchen cabinet with the container on base. Hence, maximizing the use of space and also letting you not leave your machine on the countertop.

Speaking of the countertop, by the way, the Venturist has a base footprint of approximately 10.5 by 8 inches. So, it doesn’t need that much workspace.

Similar to the Ascent blenders, Vitamix V1200 has a built-in NFC (Near-Field Communication) chip on the containers and motor base. This is what enables the blender to work with different containers as it can adjust as per the requirements of each size.

Furthermore, this machine has built-in Bluetooth connectivity that allows it to communicate with the Vitamix Perfect Blend app. Hence, enabling you to send blending programs to the blender, albeit not having the traditional preprogrammed functionality.

The Ease of Use

Technically, all full-size Vitamix blenders are straightforward to use. The blade is fixed to the container and not like Ninja blenders that need aligning the blade before you can put the ingredients.

As a high-power machine, you also won’t need to further chop down or crush the ingredients. The machine can pummel through the ingredients to a fine texture, including dry ice that many standard blenders tend to struggle with. Thus, the delivery of the blender is well-timed and effortless.

Still, Vitamix v1200 has an integrated timer that counts up during processing. More to love, the timer has two protruding dome buttons that you can use to set the time your recipe is likely to finish. So, you can still enjoy walkaway convenience without having to rely on wireless automated blending.

This is one beauty Vitamix has delivered years round, and as an owner of classic 5200, I can’t say enough about toughness. Even Venturist V1200, the blender has a sturdy, well-made construction using thick, high-impact plastic.

The blending container is also a Tritan plastic that’s also solid and food-grade. As many users have wondered, the company doesn’t use glass because of the kind of stress (like crushing ice) subjected to the machine. However, just recently the engineering team did come up with a stainless steel 48-oz container if you want to keep your kitchen plastic-free.

Anyways, back to construction, Vitamix v1200 has hardened stainless steel blades that you can use on the toughest ingredients for many years. The drive system that connects the container to the base is also all-metal, unlike other providers who use plastic.

Furthermore, the blender has a longer-lasting motor, with self-cooling and also overload protection. So, there are minimal chances of overheating or burning out the motor.

In addition to that, Vitamix offers the Venturist model with a full 10-year (standard) warranty. So, you won’t need the usual seventy-five dollars so that you can extend the warranty period. Best of all, the Vitamix warranty covers the product, components, and shipping fees. So, the single price tag gives you free performance insurance for the next decade.

As for the pricing, this blender is more expensive than all the other household selections from the many accessories included. At the time of writing, the regular tag was at around $630.00 (Brand New) but the manufacturer does offer promotions now and then.

Despite being a hybrid of the G-Series and Ascent series, Vitamix v1200 is pretty noisy when at work. It doesn’t have the noise dampening technology with blender 7500, neither does it have A3500’s metal base (better sound insulator).

Regardless, having airflow vents at the back makes it produce slightly lesser sound than the Vitamix 5200 and E310 blenders. The two classic machines have vents on the sides all around, which means more holes for the sound to escape through.

Vitamix Venturist v1200 Review: How Does it Compare With the Cousins

As we conclude, here’s a summary of how Vitamix V1200 compares with the five most sought-after models from the brand.

The main difference here is on the use of technology, in which case the Venturist has a digital timer, Bluetooth connectivity, and Self-Detect containers. It also has a longer standard warranty and also (I forgot to mention) a clear lid for the large container. But again, the Explorian is more affordable when New and also refurbished. You can check the detailed Vitamix v1200 vs E320 Comparion Review here.

The relationship here is more like that of the Explorian blender, only without the narrower container. Vitamix V1200 has wireless technology, longer warranty, clear container lid, digital timer, and can use 20-oz or 8-oz container without the personal cup adapter.

Despite the newfangled features, the Venturist, unfortunately, loses to the Vitamix Pro 750. The G-series has various preprogrammed settings (default), noise dampening technology, and premium metallic finishes.

For this one, the Venturist takes the lead, all thanks to the settable Countdown timer, which the a2300 lacks. However, both blenders do have a counter-up timer.

Is Vitamix v1200 Really Worth The Money?

The question on the worthiness of Vitamix V1200 depends on several aspects.

If you pass all three questions with a YES, then, the Vitamix Venturist has everything you need to blend better. And the best part of it, you get the machine with extra accessories that the other blenders don’t include.

Also, Vitamix Venturist and Ascent blenders hold the “future of blending” with the brand. At first, many people didn’t comprehend what the company meant by this. But last year after the release of the Food processor attachment, it became apparent.

In any case, hopefully, this review has covered everything you were looking for on the v1200. All the best, and happy many years of healthy blending.