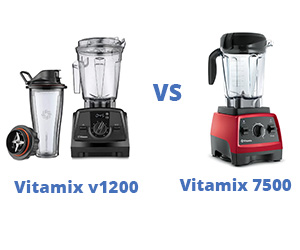 The other day we had a comprehensive Vitamix V1200 review in which we mentioned it holds a special key to future blending. In this post, I’d like us to have a detailed Vitamix V1200 vs 7500 discussion to see which can make a great addition in the kitchen.

If you can remember, I did mention the Venturist model having some parts of the Next Generation “G-Series” in its

design. But from the same standpoint, how well do the two stand out from each other? And is it really worth it forking out such a sum on the V1200 while you can get the Vitamix 7500 at a real bargain?
Well, from my point of view I believe Vitamix V1200 is worth all dime.

Why I Would Recommend Vitamix Venturist V1200

Vitamix V1200 vs 7500: Comparing the Features and Capabilities of the Blenders

Before 2016, Vitamix blenders had only one key accessory, a tamper. For the Vitamix Venturist v1200, however, you not only get the tamper but also a tamper holder, under-blade scraper tool, and two single-serve blending cups.

The motor base of the blender has an embedded NFC (near-field communication) chip that can communicate with the NFC chip of the containers to regulate the operating settings. So, you lock the single-serve cups (20-oz and 8-oz) to the base without the bulky personal adapter.

As for the Vitamix 7500, there’s no self-detect feature. So, you’ll have to use the personal adapter if you want to blend with the single-serve cups. Also, the blender comes with only the tamper, even though you’ll also get a cookbook and printed manual like all Vitamix blenders.

The Styling: Which Looks Better?

As I mentioned while discussing Vitamix E320 vs 7500, the G-Series model came with a classic base but with some redesigning. The air vents designs made the biggest physical difference, even though they primarily were a solution to muffling the blending noise.

Another thing, despite the manufacturer releasing blender 7500 after the Pro 750 G-series, the new model didn’t come in any premium finishes. It was more like a downgrade of its sister, with only the standard color.

But again, most of the Vitamix blenders have regular finishes, including even our model V1200. However, the Venturist does look more appealing from the timer display and the wider control board. The back also does look nice from the design of the air vents that the engineers borrowed from the Ascent models.

The Power: Which is stronger or faster?

Technically, this is a tie as all the two Vitamix blenders have a 2.2 horsepower motor that the company innovated for the low-profile container. So, the blending speed is also the same (around 24,000 RPM), and so is the processing times. Furthermore, the two blenders have a peak horsepower boost to help counter the startup resistance (in case it’s there).

But I have said severally, a Vitamix with a 2.2HP motor delivers the same blending performance of the models with 2.0 horsepower. Both designs can deliver smooth smoothies and even bring cold soup mixtures to a hot temperature.

The Container: Can it Blend Small Amounts?

Usually, the type of container a Vitamix blender has determines the kind of motor at the core. So, expect no much difference from Venturist V1200 and model 7500 G-Series, considering they both have like motors.

The two blenders use the 64-ounce low-profile container that the company introduced to counter storage issues of the classic tall jar. But that’s not the only good thing about the container. Its wider design also allows the food materials to fall into blades more easily, which calls for less need for the tamper and even enhances chopping.

That said, though, Vitamix V1200 can use the 20-ounce and 8-ounce blending cups without the need for a personal adapter. The integrated self-detect technology via the NFC tags on the containers and motor base helps the blender adjust the blending times. If it’s the full-size 64-ounce container, the motor automatically stops after 6½ minutes, 7 ½ minutes for 48-ounce, and 1¼ minutes for 8-ounce and 20-ounce containers.

Meanwhile, the 7500 G-Series and other Legacy classic blenders don’t have container detection technology. So, you’ll have to use the personal adapter unit if you want to blend with the single-serve to-go cups.

Ps. Despite its many benefits, the low-profile container is relatively wide and inconvenient in handling small batches of ingredients. Therefore, you may need to buy a 48-ounce narrower container for either Vitamix 7500 or V1200.

The Sizing: How Much Space Does It Take?

This is another feature the G-Series and the Venturist share, all thanks to the low-profile container. The jar of the container has a shorter height than that of the classic Vitamix 5200. So, you can slip the machine under the 18-inch standard cabinet while the container is locked to the power base.

Still, the Vitamix v1200 has a footprint of around 10.5 by 8 inches, and the model 7500 measures 9.4 by 7.7 inches. So, they also use an almost similar countertop space, albeit the G-series is some inches smaller.

Technology: Which Has The Best Intelligence?

Put simply, both Vitamix blenders have a share of advanced tech that the other doesn’t have. If it’s blender 7500, the engineers created it with a redesigned base, featuring vibration dampening to help muffle up the blending noise a little bit. As you know well, high-power blenders tend to be noisy, especially for Legacy models that have multiple air vents all around the base. But for the line of G-series, all the models are noticeably quieter since they even have enhanced airflow management.

Meanwhile, Vitamix v1200 lacks the noise dampening technology but still produces lesser noise than the Vitamix 5200, 6300, and Explorian variants. This is enhanced by their one point of airflow, unlike the classic models with three-outlet points (at the front and sides).

Still, the Venturist blender has built-in wireless connectivity to detect the containers and Bluetooth to send commands via your smartphone. It also has a built-in timer that might come in handy if you wanted to activate “walk-away” blending.

Ease of Use: Is There Automated Blending?

In general, all full-size Vitamix blenders are straightforward to use. The blending container has a fixed blade and the motor is strong enough to pulverize the ingredients without you having to chop them down further.

Even better, our two models, v1200 and 7500 G-Series have a dedicated pulsing switch and a full-range variable speed dial. So, you can make any texture and a wide range of recipes without having to improvise as with Vitamix 5200.

However, neither of the two machines has the default preset programs for automated blending. But with the settable timer on the Vitamix V1200, you can input the seconds or minutes and leave the motor to auto-stop after the last countdown. Moreover, you can use the Bluetooth connectivity of the blender to send up to 17 different programs via the Vitamix mobile app.

It’s no secret Vitamix as a brand isn’t for everyone. The Ohio maker provides high-end kitchen appliances but which are worth it, if I may say. For instance, despite not having automated blending, my classic 5200 processes anything I throw into the container.

In any case, what I’m trying to say is that Vitamix v1200 and 7500 are expensive, yes, but you’ll find them effective in the long run. From the quality of materials and engineering, you can still be using the machine for several decades without making another buy.

Nonetheless, the Venturist is about a hundred bucks more expensive than the G-Series because of the used technology and included accessories. But the blender comes with a longer 10-year standard warranty, whereas its counterpart is 7 years. So, you’ll enjoy free repairs and replacements (without shipping fees) for a longer time and without having to pay a warranty extension fee.

At this point, we can agree both Vitamix 7500 and Venturist V1200 are outstanding blending machines for a household. They have high power for tough tasks, sturdy design for durability, and low-profile containers to enhance chopping, storage, as well as scraping thick mixtures out.

But if you have enough budget at hand, Vitamix V1200 might be a better choice for your current and future blending needs. Not only can use personal blending cups with ease but also there’s a timer to take out the guesswork from your kitchen adventures.

Similar to the Ascent models, the Venturist is also more open to the future technologies that Vitamix introduces to its line of smart blenders. So, there’s a better chance of having better and better blending capabilities. Last year’s smart food processor attachment is a good example.