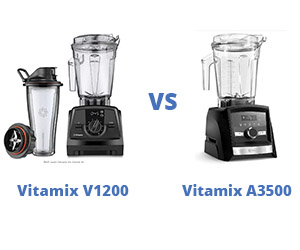 If you’re new to the blending community, it’s no easy to decide between Vitamix V1200 vs A3500. Both are the lines of the smart blender system that Vitamix innovated for those who would want to invest in the future of blending.

The two machines have so much in common, which makes it harder to choose if you don’t know what to look. If it’s the power, they both pack a 2.2-peak motor that’s equivalent to the 4-inch blade diameter of the low-profile container.

Also, the machines have the newly-designed wireless technology that makes it possible to use various container sizes without the need for the bulky personal cup adapter.

The 4 Things that Makes Vitamix A3500 the Best Blender

As was mentioned a while back while discussing Vitamix A2500 vs A3500, the Ascent line is the way to go if you want fancy cool tech in your kitchen. The model A3500 has a sleeker styling, thanks to the flat touch buttons and the metal base options. Also, it is the only model with all the features that engineers wanted to give to the Ascent series.

On its end, Vitamix V1200 has the answers for those who appreciate new technology but still prefer physical switches over touchscreens. The blender came about two years after the Ascent line, but I don’t think the maker intended to have it in its catalog.

One of the reasons for saying this is because it first appeared at Costco stores, supporting the claims Vitamix primarily created it for this American Retail Company.

Secondly, Vitamix v1200 is mostly a redesigned Ascent A2300, without the exclusive curved bevel, then added with a settable countdown timer. Its front panel is similar to that of G-series from Legacy class, but the back vent is that we seen on Ascent models.

In other words, Vitamix V1200 is a hybrid machine between Vitamix 7500, A2300, and A3300. More on that, continue reading the comprehensive comparison review below.

Vitamix v1200 vs a3500: The various Similarities and Differences

Similar to other creations from this brand, Vitamix v1200 and A3500 are high-power blenders that you can use in a wide range of tasks. Both machines pack a powerful 2.2 horsepower motor that can eat through any materials that you put in its belly.

The motor even has a peak horsepower boost that enables the machine to start at a higher speed to counter initial resistance. Since the motor is not meant to run at such high speeds throughout, it then drops to the original measurements (around 24000 RPM).

Another thing, the two blenders have multiple speeds setting that surely come in handy when blending different materials and textures. They have 1 to 10 incremental speeds, which uses a physical knob that gives manual control.
Still, the variable speed dial offers a full-range control, whereby you don’t need extra switch adjustment as with the Vitamix 5200.

All the two blenders feature the latest self-detect technology that allows you to use various container designs on the same motor base. In our previous discussion on Vitamix A2300 vs E310, we mentioned the Ascent machines having NFC tags. So, you can use a 64-oz jar, as well as the smaller Ascent-certified 8-oz and 20-oz containers.

Well, even the Venturist has similar smart tech that makes it easier to use single-serve containers without the personal cup adapters. So, you can make your single smoothie faster and even take it as a to-go drink since they even have spill-proof lids.

Even so, neither Vitamix V1200 nor A3500 come with a narrow container that can use a tamper. So, you’ll need to either buy the 48-oz container separately or opt not if you aren’t planning on making nut butters and other thick blends. Otherwise, the 64-oz low-profile container is quite wide and tricky to make 2 cups or less of blends.

Then, you can’t use the 8-oz or 20-oz containers for the nut butters since there’s t no way to use the tamper (which is very crucial when dealing with thick mixtures).

This is now where Vitamix V1200 differs in a big way from the Ascent A3500. The Venturist has all physical controls, including pulse and starts/ stop paddle switches. The timer also uses dome switch buttons and the variable speed knob is the traditional make with an absolute position.

As for the timer buttons, they do work perfectly well but you’ll come to notice they require a bit of force to activate. More on that, the timer takes a little longer to set, and also the buttons protrude a bit, making A3500 more attractive with its flat touch interface.

Even for the pulse, start/ stop switch, and smart programs, the Ascent blender uses capacitive buttons. It also has a digital variable speed knob, which works pretty much the same but doesn’t have an absolute position. As such, the speed setting will always reset to the lowest position “1” after completing or stopping the blending.

Still, the digital knob of the Vitamix A3500 has a premium feel compared to that of Venturist V1200. While adjusting, it moves from 1 to 10 in half-step increments, which is pretty different from the control strip of Vitamix 780 that has quantized speeds.

Overall, all Vitamix are effortless to use. If it’s our two models, they both use a 64-oz container that has the blade assembly permanently fitted at the bottom. So, the machine is straightforward to assemble and disassemble, unlike the alternative Ninja models that come with a removable blade.

Even so, Vitamix a3500 has an added advantage of five programs for automated blending. If you would want to explore more features, you could sync up your blender with the smart app and unlock up to 17 programs.

Meanwhile, Vitamix V1200 doesn’t have the default preset programs but that isn’t to mean you can’t enjoy the “walkaway “ convenience. Just like all Ascent machines, the Venturist can also sync up with the app via Bluetooth connectivity and send up to 17 programs.

If not that method, Vitamix A3500 and V1200 have a settable count-down timer on the control panel. So, you can input the respective times your blend mixture is likely to complete and leave the blender to automatically power off after completion.

This is yet another difference that’s pretty visible when comparing Vitamix A3500 vs V1200 blenders. Similar to other Ascent models, A3500 is more appealing, in particular the base where it has the curved bevel and futuristic front panel.

As I mentioned earlier, the Vitamix A3500 blender also does have multiple premium metal finish options. They include brushed stainless, Black stainless, copper, and Graphite, making it a total of 6 colors if you add the standard white and candy apple red.

On its end, Vitamix v1200 has only the basic colors, namely slate, white, black, and red. The blender also lacks the characteristic Ascent curved bevel and the capacitive elegance at the front.

It’s no secret all Vitamix blenders are not one-time-use machines, which is why many household and commercial joints usually opt for them. So, durability is an aspect that the Ascent and Venturist series share across all the models.

If it’s the base, for instance, the engineers use a tough plastic to protect the motor, as well as control the noise level. The motor itself comprises superior components that aim to deliver the power you need to blend while maintaining durability.

Even better, the motor has an integrated radial cooling fan and thermal protection technology to protect against overheating or overloading. That’s not all.

The company uses an all-metal gear drive system that ensures you can continue blending even the toughest ingredients for a long time. Also, the containers provided are tough, shatter-resistant Tritan Copolyester plastic, which can handle hot soups of up to 200F.

Ps. In mid-2020, Vitamix unveiled a 48-oz stainless steel container for those who don’t want to have a plastic container in their kitchen. It works will all the full-size machines, including our smart selection with the Self-Detect technology (V1200 and A3500).

Absolutely, YES! Any full-size Vitamix blender can make some delicious ice cream in less than a minute. If it’s a Sweet Vanilla Strawberry ice cream, for instance, you just need milk, heavy cream (or coconut milk), date syrup, vanilla extra, and whole frozen strawberries. Then, blend the mixture for 30-45 seconds, with the tamper at hand so that you can push the ingredients to the blades when needed.

Notes: You can’t make ice-cream or any other thick blend in the 20-oz or 8-oz cups since there’s no way to use a tamper.

Does Vitamix v1200 have presets?

Vitamix v1200 is more like the basic Ascent A3500 but added with a settable count-down timer. The blender doesn’t have the default preset programs like those of A3500 for automated blending. However, it does have wireless connectivity technology that allows you to pair with the smart app and send programs.

Which Vitamix model is the best?

At this point, Vitamix has so many blenders to choose from, thus the perfect one for you depends on individual preferences and needs. If it’s our two models v1200 and A3500, the former comes with more extra accessories, including a single-serve cup, 8-oz bowl, and under blade scraper.

On the other hand, Vitamix A3500 comes with default automated blending, plus it has elegant styling and premium finishes. But since you can still get the extra accessories if needed, I would prefer the Ascent machine for my trendy taste.

Does the Vitamix v1200 have Bluetooth?

A simple answer, YES. The feature is what enables the blender to communicate with Vitamix app to receive programs for automated blending.

If you just need to upgrade to a high-power blender, regardless if there’s automated blending or not, both Vitamix v1200 and A3500 is a win. They have a perfect balance of power, tough blades, and a large container that you can use to process both soft and the toughest ingredients.

Thanks to self-detect technology, the two blenders are also more convenient than the previous models. This is so as you can use even the small blending cup and bowl without the use of the bulky adapter.

Even so, the Vitamix A3500 has metallic finish options, which, in my option, are better than the standard colors. For instance, these premium finishes tend to hold onto the machine longer than the basic colors. It also enables the machine to muffle the noise better, in which case the blending is less noisy than when using the Venturist or an old classic like 5300 C-Series.

Regardless, the Vitamix G-series remains the quietest blender family, courtesy of the redesigned motor base and addition of noise-dampening technology.