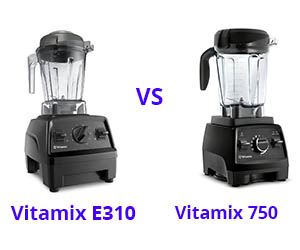 In this review, we’re going to do a comprehensive comparison between Vitamix E310 vs 750 G-Series blender. Both machines certainly are great options if you need a high-performance blender, but each does have several strengths over the other. So, the blending results are pretty much alike, but the overall experience do differ.

That said, however, the Vitamix E310 is the way to go if you are not expecting much from your blender, other than blending stuff. As one of the Explorian collection, it’s a simple design without any new feature even though it came after the futuristic Ascent Series.

On the other hand, model 750 is part of the Next-Generation blenders that Vitamix innovated to address some of the issues with the blender 5200. It’s the most premium classic that you can consider if you don’t want the new technology of Ascent machines.

Here’s an overview of Vitamix 750 vs 310 before we can talk about a whole lot of specifics of the two appliances.

If you would like to get a brand new Vitamix but you don’t have four hundred to spend, the Explorian blenders are a great fit. The blender lineup comprises of two products, E310 and E320 that Vitamix released in 2017, several months after Ascent Series.

Despite being a later model, though, Vitamix E310 didn’t come with any fancy or new feature/s. It doesn’t even have the capacitive controls, Bluetooth, or NFC technology that the engineers introduced to the four Ascent blenders.

Regardless, the blender is like every other countertop Vitamix when it comes to performance. Not only can you make silky smoothies and juices, but also achieve hot soups, nut butter, frozen desserts, and grind flours or powders.

Speaking of grinding, Vitamix E310 comes with a short, narrow 48-ounce blending container. So, you can work on small and medium batches with optimal efficiency.

In 2012, the Vitamix Pro 750 was the new talk to the blending enthusiasts. As mentioned in the previous Vitamix 7500 vs 750 review post, the blender came to solve some of the issues from the 5200 C-series. Of course, it didn’t address all the issues but the main ones were no more.

Vitamix 750 has a redesigned motor base, featuring additional vibration dampening technology and enhanced airflow management. This results in a dramatic noise reduction- up to 7 decibels. So, you’ll notice it’s relatively quieter than most blenders of similar power output.

Also, the G-series machine was the first to have the newly designed low-profile container, featuring a shorter form. Hence, easier to fit the whole blender (base + container + lid) under most kitchen cabinets.

In addition to that, Vitamix 750 does support automated blending, with up to five preprogrammed settings. So, you can make your favorite frozen dessert or smoothies with high consistency even if it’s your first time.

Vitamix E310 vs 750: the Various Features and Capabilities

Even though they are from different series, Vitamix 750 and E310 are not completely different. There are several aspects they have in common, starting with the classic makeup.

Technically, Vitamix Explorian is pretty much identical (physically) with the Vitamix 7500 G-Series. For model 750, the interface appears to be slightly sophisticated but still, you can tell from the body it’s a descendant of the Vitamix 5200.

Both Vitamix E310 and 750 are powerful machines that you can use for a wide range of kitchen tasks. They do have a dedicated pulse feature and a variable speed dial, thus allowing you to complete these culinary tasks in high precision.

Storage is one of the major issues experienced by the owners of the original Vitamix 5200. The blender has a tall pitcher that makes it impossible to fit in the standard 18” cabinet while still on the motor base.

Thanks to their short containers, Vitamix E310 and 750 G-Series can perfectly fit under most cabinets without hassle. The two blenders have a total height of around 17.7 and 17.5 inches respectively, with the container (plus lid) on the power base.

More on that, the appliances don’t take up much of the tabletop space. Explorian E310 has a total base footprint of around 85 square inches, whereas the model 750 is approximately 10 by 8 inches (Depth x width).

All the two machines are straightforward to start and operate. They have some significant improvements lacking on the Vitamix 5200.

For one, E310 and Pro 750 has a variable speed dial that gives you a complete range from the slowest to the maximum speed. The blenders don’t have the “high/ variable” speed switch like that of the 5200 C-series. Then, the speed variation is more precise every time, in that the speed between 2 and 3 will be the same every time you’re blending at that position.

Another thing, both Vitamix have a dedicated pulse switch that brings you additional control over your blending. If it’s chopping vegetables or grinding ice, the feature lets you efficiently work on your ingredients and at any speed.

While buying a Vitamix blender, you’re not just paying for the blending pleasure, but also as a form of investment. The Vitamix team usually creates their appliances for two main reasons- to perform and last for many years.

If it’s the base, both E310 and 750 have a rugged well-made plastic housing, with a heavy-duty, cool-running motor at the core. The cooling fan works in hand with the Automatic Overload Protection feature to maintain the health of the motor.

Furthermore, all Vitamix blenders use an all-metal drive system, unlike other brands that tend to work with plastic. And for the containers, they have hardened stainless-steel blades that you can continue processing nearly all materials without a compromise. This includes the toughest ingredients like grains, dry ice, and frozen fruits.

If you’re just a simple enthusiast, Vitamix offers the Explorian E310 in black and slate colors. It’s also available in red color in case you would want your kitchen flashy a little bit, or else match with other appliances. Unfortunately, Vitamix didn’t include any premium finish options for the E310, but the base does have some lovely side curves from the Ascent series.

For the 750 G-series, on the other hand, the original model came in brushed stainless and copper finishes. However, the two metallic shells are no longer in production. Hence, why our comparison table shows only two standard colors- that’s black and pearl gray.

As with every Vitamix, Explorian E310 and Pro 750 doesn’t disappoint when it comes to performance. The blenders pack some strong muscle that can achieve light and heavy tasks in a matter of seconds.

Even so, the E310 has a slightly “smaller” motor, with a 2.0 horsepower/ approximately 1471 watts power output. If you follow up on Vitamix closely, you’ll come to notice this motor size is similar to that of the blender 5200. So, the Explorian machine does have a higher maximum speed, considering its blades are also shorter.

Meanwhile, Vitamix 750 has a 2.2-peak horsepower motor that the engineers designed for the low-profile containers. The extra power helps ensure the blender can complete its tasks with efficiency while using the long 4” blades.

If allowed, it’s okay to say Vitamix E310 is more like a variant of the 5200. Both blenders have a 2.0 HP motor and use a narrower container for blending purposes.

Regardless, the E310 container has a capacity of 48 ounces, which is equivalent to 4 or five cups of beverages. This container is shorter than the classic 5200, which means it’s easier to scrape sticky ingredients out or clean.

On its end, the blender Pro 750 comes with a 64-ounce low-profile container. The jar is also short but does have a wider form and longer 4” cutting blades. For this reason, this machine is also easier to scrape food out and clean. It’s also more efficient when it comes to chopping and heating tasks.

On the negative side, however, the Pro 750 container has a high risk of splashes when blending small amounts of smoothies.

If it’s your first time in the culinary world or you need to multitask, Vitamix 750 might come in handy. The blender has manual controls and multiple preset programs for automated blending. For the latter, the blender a function to make purees, smoothies, frozen desserts, hot soups, and self-cleaning. In which case the motor will automatically turn-off after your dish is ready.

Sadly, Vitamix E310 doesn’t have any preprogrammed settings. So, you’ll have to rely on manual controls for all your blending.

Thanks to the re-engineered base and vibration-dampening technology, the G-series blenders can reduce noise by up to 40%. Yes, they still make noise, but not as loud as their counterparts without this piece of tech.

Since the Explorians don’t have this tech, therefore, the model E310 is quite noisy than the Pro 750 while at work.

Notes:
In the last quarter of 2015, Vitamix released an upgrade of the Pro 750 under the Heritage lineup. Performance-wise, the new blender was equivalent to the original model, but for the construction, it had a solid metal base. Thus, more durable and a bit better muffling the motor noise.

When it comes to deciding between Vitamix e310 vs 750, there are five questions you need to answer to yourself.

If the idea is to only make smoothies, mix stuff, and make your fresh coffee, the Explorian machine will be a good go. It’s powerful like any other Vitamix, plus you can save $100 to $150 on brand new equipment.

However, if you’re a family person and your budget allows, investing in Vitamix pro 750 is more worthwhile. Not only does it come with a larger blending container, but also has five functions for automated blending. So, you can prepare a variety of recipes without guesswork and enjoy walkaway convenience.

But if you’re passionate about culinary and you want to make the most from your household blender, Vitamix Ascent might be a good choice.